Since a long time, Gujarat has been known as the Mecca of wildlife lovers in India. The Gir forest reserve has been known as the only lion reserve of India. But, apart from Gir forest there are a lot of other wildlife sanctuaries in Gujarat. The city of Gandhinagar has emerged as one of the leading care taker of wildlife hosting two of the largest wildlife sanctuaries of Gujarat, namely, Indroda National Park and Blackbuck National Park. 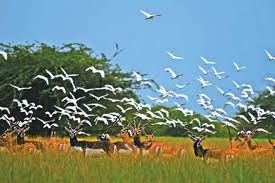 Spread over an enormous area of around 500 Hectares on the banks of Sabarmati river, this national park is considered to be one of the pioneer ones in India. It is a huge example of the blend of nature's resplendence and the care and management skills of men. It was one of the major initiatives which led to Gandhinagar being the greenest city of India. In this age, where men are exploiting nature at the pace of a wild fire, this natural park sets a perfect example of sustainable development. Indroda National Park boasts of having different sections devoted to different species of flora and fauna. They have a huge collection of rare and highland birds in their Avifauna section which makes it popular among bird-watchers. Apart from the Avifauna section, they also maintain an aviary which is considered to the largest aviary in Asia. They  have a section devoted to mammals which have exhibits ranging from tigers to blackbucks and chinkaras. The most popular section of Indroda National Park is the one devoted to Dinosaurs and Fossils. Set up by the Geological Survey of India, it is one of the largest dinosaur parks in the country. Apart from carrying popular exhibits like T-Rex, it maintains a dinosaur-egg hatchery as well. It is popularly referred to as the Jurassic Park of India. They also have a section devoted to reptiles which has around 13 different species of reptiles. The park maintains its collection of fauna in two sections namely, the plant section and the botanical garden. The botanical garden was an initiative to create a public knowhow of medicinal goodness of different species of fauna. Apart from flora and fauna, the park has developed an Earth section which shows the evolution of Earth from the perspective of Geology. A study and exhibition of different types of rocks is provided by the Earth section. For any nature lover, the Indroda National Park is a must go. It will be a wonderful learning experience for all kinds of tourists.
Location of the Park:
National Highway 8C, Dholakuva
Gandhinagar, Gujarat
Timings:
Thursday to Tuesday (9am to 5:30pm)
Wednesday Closed

Located in the Bhavnagar district of Gujarat, it takes around 3 hours to reach this park from Gandhinagar. It is also known as the Velavadar national park. It is mostly plain, dry grassland with a lot of species of flora and fauna. This park is known for the large variety of migratory birds that pay a visit during the winter months. One of the popular birds found here is the bustard or also known as the Lesser Florican who are considered one of the endangered species of India. There are intensive conservation programs initiated by this park to save wolf, bustard and the black buck. The population of these species in India has been gradually declining over the past few decades. The effort and hard work of this park in their conservation have been recognized by nature lovers all over the world. In the winter months, one can also see the striped hyena which is a common sight. This is yet another treat for wildlife lovers who come to Gujarat.
Location of the Park:
Velavadar, Bhavnagar
Gujarat 364313

There is a lot of scope for wildlife tourism in and around Gandhinagar. This city is one of the leading contributors of the status of Gujarat in wildlife tourism. If you are ever considering a tour to a wildlife sanctuary, make sure you keep Gandhinagar in your list of options because it has a lot to offer.