The Sabarmati Ashram is located very much near to Gandhinagar city which is the capital of Gujarat. This ashram is now a museum where many tourists visit it all around the year. It has got an historical significance with it. When Mahatma Gandhi returned from South Africa during the year 1915, he was in search of a place so that he can settle himself with his small group who were said to be with him during the African struggle. 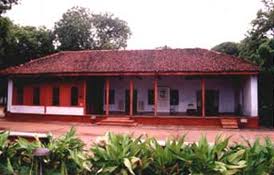 Gandhiji chose this place and started the handloom during the early days. The spinning wheel was invented at this place. He hoped that Gujarat would turn into a place with many wealthy people in the near future. Mahatma Gandhi believed that this was the exact place where he can organize and continue with the activities among his followers. He also reported this is the starting point in which truth and fear gets the real meaning as the people are going to overcome it through non-violence.

Small houses were built in the Ashram during the early days. The 36 acre land was completely changed into the Sabarmati Ashram and Gandhi made use of this place to test the spiritual hypotheses and morals of his own. Many people started following Mahatma Gandhi and they indeed turned into his followers by staying in this Ashram. They were all connected together, even though they are different in terms of color, blood and gender. The important objective of The Sabarmati Ashram is to learn to speak truth, control the thinking of drinking any alcohol, to stop stealing and to think positive. The untouchability was highly discussed in this place and many people started to raise their voices only after these discussion that happened in this ashram. Mahatma Gandhi encouraged people to turn towards home-made articles and he was the one who bought the real talent inside each and every follower of him.

The First Struggle from Sabarmati Ashram

Gandhi started the first struggle against the British government from this place. He was supporting the strike that was carried over by the textile workers. The workers were said to be paid very low and the owners were getting healthier day by day. This made the rise for a strike against them and Gandhi taught them non-violence which is a method to fight for their needs without getting angry by any means. The untouchability campaign took place in this place which indeed made his name reach all over India. Gandhi’s Charkha was very famous in those days. During his stay in Sabarmati Ashram, Mahatma Gandhi was prisoned for about six years and this is where he published his autobiography named as “My Experiments With Truth”, that got published and released after his release from the jail.

Mahatma Gandhi left the Sabarmati Ashram during the year 1930 as he had made a decision to go for a 240 mile walk to protest against the Salt talk that was imposed on the people of India by the British government. Gandhi made only 79 of his followers to accompany him as he didn’t want everyone to suffer. The long walk protesting the government that Gandhi made is known as The Dandi Salt March. This one movement which he had organized made people from all over India to get united together, which later on lead to the freedom for the nation. After the Dandi Salt March, he was no more called as Mohandas and people preferred to call him as Mahatma, which means a great soul.

Gandhi made a statement that he would come back to the Sabarmati Ashram only after his country gets its Independence from the violent British government. As he said, he made India a free country and everyone were so proud of him when the British government feared for the people in India and left the country to them. After the Independence, he could not return back to the Sabarmati Ashram as he was assassinated by Godse during the year 1948. After his death India got divided into two countries, namely India and Pakistan. Gandhi did not want this to happen, yet, he was no more alive to stop it from happening.

The ashram is now said to be a museum for Mahatma Gandhi. During 1963 the building for museum in this place was erected and the memorial activities were started during the same year. The Gandhi Smarak Sangrahalaya was established in this place and it is the most important activity that happened in this place after the death of Mahatma Gandhi. Gandhi’s own cottage that is located in the Ashram and the Sangrahalaya were shifted to a new and well furnished building during the year 1963. Jawaharlal Nehru, the first Prime Minister of India inaugurated it during 1963.

Upsana Mandri: This place is a prayer ground that is said to be in an open air. It is located in between the Magan Kutir and Hridaya Kunj. Gandhiji would answer to his followers questions in this place. There would be prayers taking place all around the bay.
Vinoba Kutir: This place was named as Vinoba Kutir after Acharya Vinoba Bhave who has stayed in this place. She is one among Gandhi’s disciple and the daughter of an old British Admiral.
Nandini: This place is situated on the right side of Hridaya Kunj. Nandini is an old guest house in this Ashram in which many tourists from abroad to stay and take some rest.

Features of Museum in Sabarmati Ashram

The museum has got a gallery that has life-size oil paintings in it. The paintings are simply breathtaking and one should closely watch the art work that lies behind each oil painting. One can witness Gandhi’s letters and quotations that were written by him during his stay in the Ashram. There are nearly 250 photos that have been enlarged and kept inside the museum so that every visitor can know more about the activities that were made by Mahatma Gandhi for the people of India. The photos portray the historic events that took place in Gandhi’s life. The museum also has 8 different life-size paintings. The library in this Ashram has got more than thirty five thousand books in it. These books deal about Gandhi’s life, his teachings, his works, about the Indian freedom movement and much more. The library has also got a reading room with more than 80 periodicals in different languages namely Hindi, Gujarati and English.

Archives in the Museum

These have got the most precious letters that were written by Mahatma Gandhi. It has got a collection of 34,117 letters, including the one’s that Gandhi replied during his stay in the Ashram. The archives have got both the original ones and the photocopy of it. This is the way to preserve such things in the museum. Gandhi’s articles are also preserved in this museum. The articles consist of nearly 8,781 pages in it. More than 6,000 photographs of Mahatma Gandhi and his associates can be witnessed in this place. There are some rare photographs and one can only see them while visiting this place. Hridaya Kunj is the most important place in this Ashram in which the personal relics of Mahatma Gandhi are kept for display. The ashram book stores are known for selling literature and the life work of Gandhi.

The Sabarmati Ashram being a very famous museum is known for collecting and processing the things that were found during the existence of Mahatma Gandhi. They do preserve it in a good condition and later on display it to the visitors.

The main activity of the Ashram is to preserve the letters, voice-records, personal clothes, photographs and writings of Mahatma Gandhi so that many people would get motivated by watching it closely. There are some exhibitions which take place all around the year. These exhibitions are based upon the aspects that Gandhi has told through his literature works.

The Ashram collects funds from the visitors and make use of it to maintain the museum and the garden that is said to be surrounding it. There is a research center at this museum, which is said to be publishing more study and research works so that many people can get benefited from it.

The Ashram receives funds only upon the visitors’ own interest and they never demand any type of amount from anyone. The Ashram organizes classes in which the youths of India get benefitted by learning about the Gandhian thought so that they can follow it in their day to day life and reach height and make India a proud nation. They do indulge into many activities to bring the student community together.

How to Reach Sabarmati Ashram

By Road: Take the highway road that connects Gandhinagar from Ahmedabad. There are various bus routes and you can take a bus to reach the Ashram.

By Rail: If you are travelling by train, then get down at the Gandhinagar Cap Train station. This is the nearest railway station to reach the Sabarmati Ashram.

By Air: Sardar Vallabhai Patel International Airport is the nearest airport and one can reach the Ashram by taking the bus or train services.


Explore more about Tourism in Gandhinagar