Ahmedabad-Gandhinagar Metro Rail Project was considered to be a historic move taken by the Government of Gujarat which was aimed towards revolutionizing inter-city travel between Ahmedabad and Gandhinagar. The length route of the metro link between Ahmedabad and Gandhinagar is 76 kilometers and the total cost incurred in building and developing the entire project is Rs.15000 crore. Uptill now, a total of Rs.200 crore has been spent by the Gujarat Government on the project. The entire project has been developed and established with a primary aim in mind and that is of providing comfortable, world class, quick and safe travel opportunity to the people of Gandhinagar and Ahmedabad. 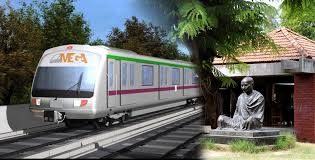 The entire metro rail link is based on the system of broad gauge which is not found in any other metro rail system of India. The idea of metro rail connectivity between the cities of Gandhinagar and Ahmedabad was initiated by Gujarat Infrastructure Development Board so that the problems of urban transportation could be identified and solved in Gandhinagar.