Mahudi Jain Temple is located in Mahudi, a village in Gandhinagar district. It is the spiritual place for the Jain pilgrims. The temple is said to be covered an area of two square kilometers. It was called as Madhumati temple in the past generations. The idols that are present in this Jain temple are the ones that were recovered from the mud. Ancient people followed a tradition in which they would be preserving the idols by keeping it under the ground and surrounding it with mud. The idols are more than 2000 years old and they still look the same way as some of the brilliant architects made it in the past generation. The Brahmi script holds the inscriptions that can prove that these idols were created 2000 years back. Many Jain devotees from all around India would visit this place and make their prayers to the God. 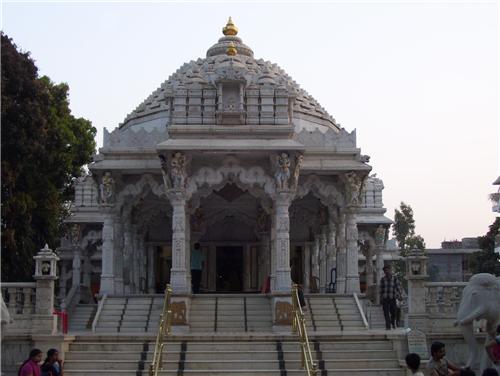 There is a huge bell at the outer area of this temple which is placed 30 feet above the ground, which makes people to climb up to ring it, to fulfill their wish. One can find a big temple in the vicinity that houses the Bhagwan Padmaprabhu of 22 inches high made with marble sitting in padmasana posture or lotus pose which was erected by Acharya Dev. Bhoomti is taken around 24 tirthankaras’ shrines found here, which is a customary procedure.

Ghantakarna Mahavis is the name of a king who protected the people from the evil forces in the past generation. An idol of the king can be found in this temple and he is said to be holding weapons in both his hands. In his right hand he holds the bow and the arrow on the other hand. Local people in Gandhinagar have named him as the protector of the whole empire as there was the only person who saved many people from the evil forces.

Local people do offer Sukhadi to the God in this temple. Sukhadi is a famous food in Gandhinagar. Many people from all over India do visit this temple to offer Sukhadi and make their prayers to their God. The pilgrims who offer it to the God before leaving the temple must eat Sukhadi. This is because people do believe that they would get bad luck all throughout their life if they skip eating the Sukhadi which they have offered to the God. Eating the food that was offered to the God can bring all happiness and success all throughout their life. This is a great belief at this place and many people do follow it even in their day to day life.


Location of the Temple: The temple is in Mahudi, a small village near Vijapur in Gandhinagar district. It is at a distance of 35 kms from Gandhinagar city.