Gandhinagar is the capital city of Gujarat. It ranks amongst the major cities of Gujarat like Ahmedabad, Vadodara, Surat and Rajkot. The city is located approximately 23 kilometers north of Ahmedabad. It lies on the western bank of River Sabarmati which flows at a distance of 464 kilometers from Mumbai. 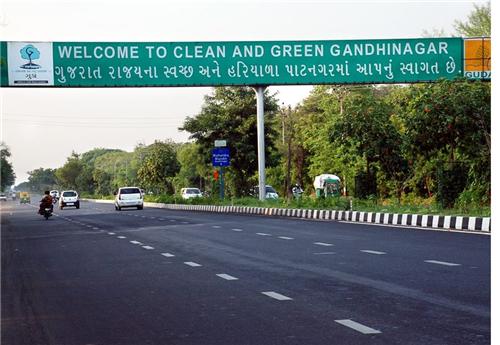 Gandhinagar has a history dating back to 13th century when it was ruled by King PethaSinh. Then, it was a small town known as Shertha.
It got recognition as a capital city in 1960 when Mumbai was split into two cities namely, Mumbai and Gujarat. Gandhinagar served as a second home to Mahatma Gandhi from where he started the freedom struggle and so got its name from him.

The average elevation of Gandhinagar is 81 meters and the city is situated on the banks of River Sabarmati. The city lies in the north-central-east direction of Gujarat and is spread over an area of 205 square kilometers. River Sabarmati dries up during the summer months and only a very small and narrow brook of water is found in place of the river. Gandhinagar is also called the tree capital of India because 54% green cover is land area in the city.
Click here for more...

Gandhinagar experiences three common seasons namely winter, monsoon and summer. The climate here is normally hot and dry except in the monsoon season. From the months of March to June, the weather remains very hot with maximum temperature measured in the range of 36 - 42 degree Celsius.  The minimum temperature recorded is 19 - 27 degrees Celsius.

Humidity is felt from June to mid September due to the southwest monsoons and the annual rainfall is measured to be around 803.4 mm.

Gandhinagar has been divided into thirty sectors that stretch across the central complex of the government of Gujarat. Every sector in Gandhinagar has its own community center, health center, shopping center, primary school, private housing and government housing as well. All the sectors also have the provision of extensive planting, recreational area and parks beside River Sabarmati that offers the city an atmosphere of green garden.

The planning of entire city of Gandhinagar has been done by two planners from India namely H.K. Mewada and Prakash M Apte. Gandhinagar possesses Akshardham Temple which is the most important temple in Gujarat. Gandhinagar ranks second among the planned cities of India, the being Chandigarh. Gandhinagar also serves as the administrative and the commercial center of Gujarat. The areas in and around Gandhinagar are rich in black soil which makes them good for cultivation.


Gandhinagar presents a wide range of hotels to its visitors.

The buses of Gujarat State Road Transport Corporation run on Gandhinagar roads. It also operates intercity buses that connect Gandhinagar and Ahmedabad. You can also travel through the local buses and auto-rickshaws.  Click here for more.

Gandhinagar carries the rich Gujarati legacy through its culture that is presented by the amazing craftsmanship like wood carvings, terracotta work and ethnic wears. It enjoys exotic festivals like Uttarayan, Navratri and Diwali.